“From start to finish, more than 1,300 coaches—both ICF Members and non-members—from around the globe participated in this research. These coaches represented a diverse range of coaching disciplines, training backgrounds, coaching styles, and experience and credentialing levels. No other coaching certification body has undertaken this level of research, and we’re incredibly proud of the quality, integrity, and validity of our evidence-based approach to credentialing, and to the value, it brings to ICF credential holders.”

So… what’s new with the ICF CC model? 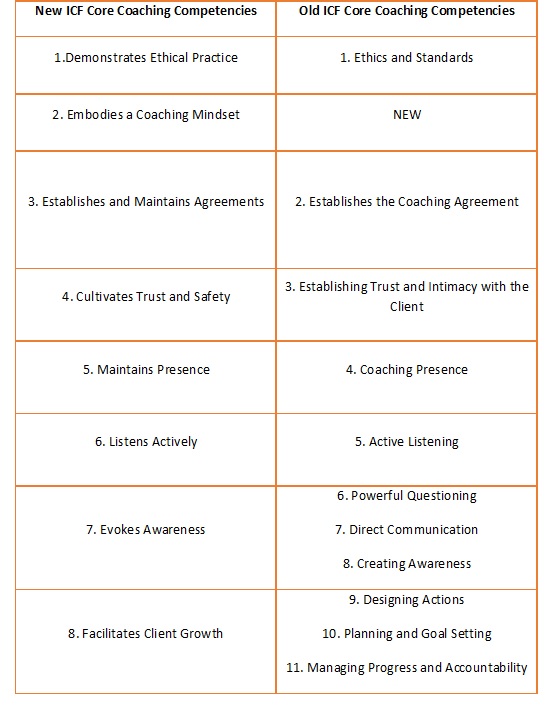 It is similar to the previous model, yet new additions are made in this competency. For instance, respecting and recognizing the client’s identity, environment, experiences, values, and beliefs as a part of coaching competency makes coaching applicable on a broader humane context.

Definition: Develops and maintains a mindset that is open, curious, flexible, and client-centered.

Coincide with older competency “Coaching Presence” that actually focuses on a spontaneous relationship with clients that is open, flexible, and confident. Other notable additions in this competency are:

Definition: Partners with the client and relevant stakeholders to create clear agreements about the coaching relationship, process, plans, and goals. Establishes agreements for the overall coaching engagement as well as those for each coaching session.

Definition: Partners with the client to create a safe, supportive environment that allows the client to share freely. Maintains a relationship of mutual respect and trust.

This core competency address coaches to adapt to the client’s system rather than forcing them to adapt to the coach’s system. The phrase “trust and intimacy” has been changed to “cultivating trust and safety.” Given everything we are learning about psychological safety, this feels the right addition to the new competency.

Definition: Is fully conscious and present with the client, employing a style that is open, flexible, grounded, and confident.

This is similar to the current Coaching Presence definition. However, the context of ‘being present’ here changes with the addition of the “Embodies a Coaching Mindset” competency.

Definition: Focuses on what the client is and is not saying to fully understand what is being communicated in the context of the client systems and to support client self-expression.

Definition: Facilitates client insight and learning by using tools and techniques such as powerful questioning, silence, metaphor, or analogy.

Definition: Partners with the client to transform learning and insight into action. Promotes client autonomy in the coaching process.

The new ICF CC model is more holistic, recognizing the need for coaches to be aware of their coachee’s culture, identity, values, and overall context. The updated competencies clearly help aspiring coaches to comprehend coaching as a client-driven process rather than a coach-driven process. The current core competencies still are in the majority. The older model will be used for credentialing purposes until the start of 2021. The updated ICF Core Competencies increased clarity and brevity. Overall, the Competencies will be better understood and easier to follow.